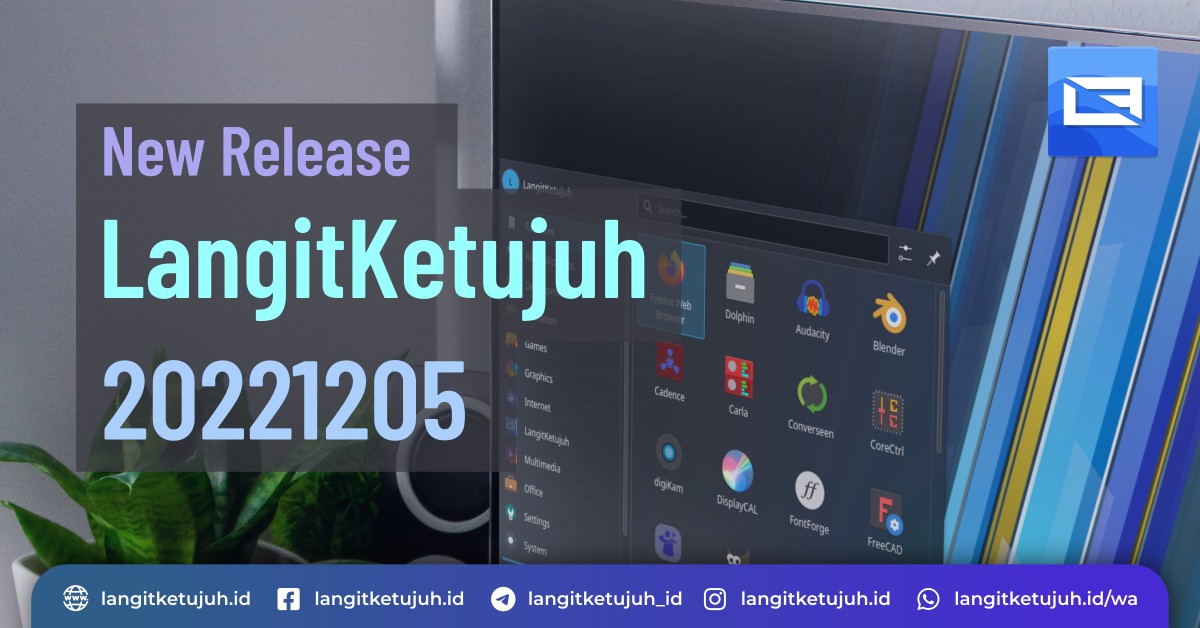 LangitKetujuh or L7 is a GNU/Linux distribution for designers, illustrators, animators, publishers, photographers, architects, font creators, cinematographers, game designers and for users who are new to GNU/Linux. This distribution is based on void linux which uses runit init, KDE Plasma desktop environment, stable rolling release and there is an efficient C library with musl libc.

Thank God we were able to release the LangitKetujuh with lots of improvements and new features. Here is a list of changes and release notes in version 20221205.

The LangitKetujuh installer with the langitketujuh-install uses the terminal interface (TUI) so new users who are new to it will have a hard time if not enough info is provided. Such as the type of disk used using gpt or dos, how many partitions are needed, what file system is recommended, whether to use /boot or /boot/efi. Everything will be confusing if ordinary users are still just starting with linux distros.

However, in this release it is quite easy for users to provide related device information. At the same time automatically selecting the local installation as the source of the file (previously there was a Local/Network option).

Users can replace it by going to system settings > Appearance > Global Theme > Select the theme and layout as desired. Also activate Desktop and Window layout.

The basic idea of the new LangitKetujuh wallpaper is glass and streaks of dazzling blue light with black night behind it. Even though it looks simple, it takes almost half a day to make the wallpaper. Everything is 100% made with inkscape vector-based graphics processing.

One of the new applications that we have added is the webapp-manager where users can create web applications as they wish. For example social media and email where there is no application for desktop native.

For details, users can refer to the webapp manager guide page.

Added some other new widget in the repository like plasma-clearclock as a beautiful desktop clock, plasma-minimalistclock as a simple clock, plasma-atmosphere as a meditation audio to make the user calmer, plasma-focus with pomodoro concept to focus more, plasma-dittomenu & plasma-onzemenu menu like windows 11 and plasma-translator to translate words/sentences from foreign languages or vice versa.

The plasma widget package requires the user to install it manually with get.

The system information viewer doesn’t always use neofetch, screenfetch, pfetch, etc. LangitKetujuh has fastfetch installed which is lighter and faster. But if you want to get even more detailed, users can use inxi.

Service settings can be done with rsv which previously used vsv. The rsv command is simpler than the default sv. For example, to activate the service by means of rsv enable servicename, reload the service rsv restart servicename, and so on.

For more details, users can refer to the runit init management guide page.

In the community we agree that some software like custom drivers need to be included. Moreover, the support for drivers and applications makes it easier for users who are just migrating from proprietary operating systems. The package included is unrar as a compressed file extractor from rar, cnijfilter2 as a canon printer driver (x86_64 only).

The iso compression that was previously gzip returns to using xz so that the iso size is smaller. Home edition size previously 3.1GB now to 2.6GB, studio edition from 5.1GB to 4.6GB. This also affects the amount of bandwidth used to save resources and storage.

By default, LangitKetujuh follows the upstream void linux kernel, so it also follows the latest linux kernel. This allows for users with older hardware not being supported anymore. But users can still use the linux-lts kernel with version 5.x.

Color profile image converter rgb to cmyk can be done with ccc via konsole terminal emulator. Its use is fairly easy, users only run ccc -i rgbimage.png -o cmykimage.jpg. By default ccc uses the color profile from ghostscript, but also supports other color profiles from krita and scribus.

For details, users can refer to the ccc guide page.

The architecture i686 or what is called 32bit has been removed because some applications such as blender3d no longer support it. Moreover, computer manufacturers are no longer making 32bit motherboards.

Font awesome comes preinstalled with all versions from version 4,5 and 6. It includes the Free category icon and some Brands icons. Users can use it for design purposes in inkscape or for office purposes with libreoffice.

The noto-fonts-cjk (chinese, japanese, korean) fonts were removed from the current edition of the iso. Because it is only used as an optional font. What’s more, the size is quite large.

If interested in using studio edition, you can refer to download page select studio edition. However, if you are already using it and want to get the latest iso, please request to the resend page, we will send it to the registered email.